'NUCLEAR FALLOUT' - In Honor of Future Cancer Victims of Fukushima 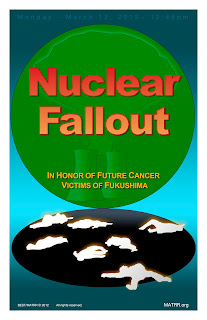 In addition to the natural disasters
of the earthquake and tsunami,
the radiation exposures
will have tragic
long-range effects
on Japan and
the families of Fukushima. 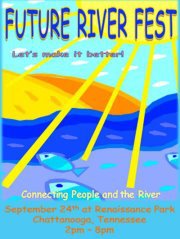 Future River Fest poster created for BEST/MATRR by Tina Terrell, September 2011
RIVER FEST
We organized and sponsored an all day festival
by the Tennessee river in Chattanooga
with numerous speakers and bands,
including Microwave Dave & the Nukes,
and booths demonstrating clean energy,
water conservation,
and river habitats, etc.
Posted by MATRR.org Events at 3.2.12 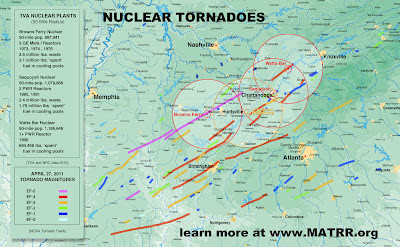 We created this map
of the 50 mile zones surrounding
TVA nuclear power plants
superimposed on a NOAA track of
Category EF-4 and EF-5 Tornadoes
that ripped past 6 nuclear reactors
and over six million pounds
of highly radioactive
spent fuel in cooling pools
in the Tennessee Valley
on April 27, 2011.

Printed on card stock with information
about nuclear energy on the back.

Distributed to TVA ratepayers
who send the check in with their bill payments.

(Read about Bellefonte below.) 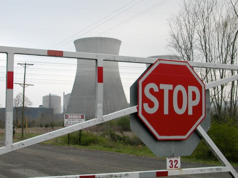 Photograph of rear gate, Bellefonte Nuclear zombie plant.
Construction began in 1974
and stopped at about 60% completion in 1986.
The construction license was withdrawn
by TVA in 2006,
and NRC inspections and oversight halted.
From 2006 until 2009
critical components, piping, and turbines
were cannibalized (torn-out and sold)
with no NRC oversight.
In 2010, the NRC granted re-instatement
of the original 1973
TVA nuclear construction license
which circumvented modern environmental and
nuclear construction requirements.
Many environmental hazards have been identified
for the Bellefonte site since 1973,
including proximity to earthquake faults,
sink holes, and river current reversals
at both the outflow and cooling intake locations.
The Tennessee Valley has seen an increase
in severe thunderstorms and
highest intensity tornadoes,
Categories EF-4 and EF-5,
with the onslaught of global warming.
There has also been a substantial
population increase
within the six mile radius
of the Bellefont Nuclear Power Plant.
The lack of quality control
and the process of natural aging
have resulted in the deterioration
and breakage of several reactor containment
support tendons,
an ongoing problem
even before the NRC reinstated
the antiquated 1973 construction license.
(see nuclear engineer, Arnie Gunderson's report on Bellefonte)
Posted by MATRR.org Events at 3.2.12 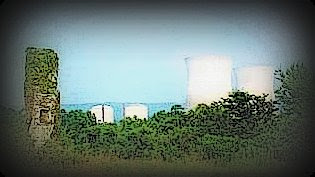 The Old Martin Inn chimney at Bellefonte, Alabama with the nuclear plant cooling towers and reactor containment vessels in background. Photo and graphic June 2008, by Garry Morgan
"Everything put together
sooner or later
falls apart."
– Paul Simon
Posted by MATRR.org Events at 3.2.12