We protest the proposed increase in un-filterable tritiated water
(heavy water that remains radioactive for 120 years)
that will be added to the Tennessee River,
and consequently, to Chattanooga drinking water. 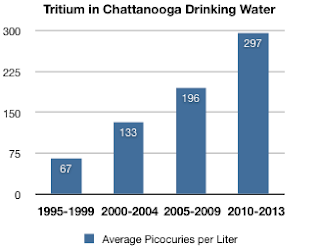 Although the radiation danger from Tritium
is underplayed because it is a relatively low energy emitter,
Tritium is a form of hydrogen
that can transform H₂0 water
into radioactive H₃0 water,
which can permeate every cell in the body
including our DNA.

According to Dr. John W. Gofman, M.D., Ph.D.
(co-discoverer of uranium, physician, and nuclear physical chemist),
this low-energy emitter, Tritium, does more
damage to our cells and DNA
than higher energy forms of radiation.
(See Dr. Gofman's "No Safe Dose" video at MATRR.org)

Our formal comments can be viewed
at http://best-matrr.org/14-0921_TritiumProductionComments.pdf.