Despite growing numbers of studies
finding no safe dose of radiation,
the Nuclear Regulatory Commission
has proposed further weakening
of exposure limits or the ALARA
(As Low As Reasonably Achievable).

Several government funded studies
of childhood cancer near nuclear power plants
followed in the wake of the 2006 German KiKK study.
As you can see, the studies show consistent
130% to 141% increases in observed cancers. 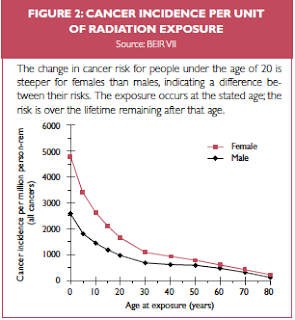 Our Comments to protest weakening of standards can be read
at http://best-matrr.org/15-0624_NRC_RadProtectComments.pdf